In 1982, we moved to our current home a mile away from Walsall town centre.
We came with a one-year old child and three more followed in the next four years. It was before the advent of mobile phones, which meant that Marie had to be within earshot of the landline telephone whenever Tony was on call for his practice. Frequent on-call sessions restricted our movements and, in consequence, the garden became the focal point for the family’s leisure and exercise activities.
We didn’t have a master plan; our garden has simply evolved in a series of projects as our family’s needs have changed.

Our quarter acre garden faces south and gently slopes down to the mature deciduous trees on our boundary with Walsall Arboretum. The soil is acid/neutral, heavy clay.
In 1982 the upper garden near the house had a square lawn, partly bordered by a decorative wall. The fifty-year-old conifer trees were overgrown and some were diseased. They towered over the garden causing dense shade, obstructing the main exit from the lawn, causing nearby grass to struggle and distorting the yorkstone paving.
The middle garden was home to an orchard of sixteen apple and pear trees, just one of which bore fruit worthy of eating.
The lower garden was accessed by stepping-stones to what had once been a vegetable plot.

For the first 10 years, we concentrated on making the garden safe and interesting for our growing family.
Since 1992 we have totally re-landscaped and replanted. We have brought in 15 tons of York stone, 11 tons of garden soil, 15 tons of concreting sand and 105 cubic metres of forest bark - everything was brought down the garage steps! Large rocks have been added, straight lines made into curves.
We built a chalet store, summer house, large wooden oriental pagoda, a smaller wooden pagoda with water feature and laid more than 380ft ( 116 m) of paths. Five water features made by us include a 17 metre long rocky stream.
All the tasks have been undertaken and completed by us. We are self-taught and have had no formal horticultural training.
The future is really exciting because we know change will continue. We created a jungle suddenly and unexpectedly - no doubt we will surprise ourselves with what we think of next!

Our priority in the first ten years was to make the garden safe and interesting for our growing family.
Breaking up the heavy clay soil proved too much for several forks, spades and pickaxes during the first six months; however, we eventually won the battle with weeds.

One path we created was the length of the garden and proved a fantastic 180-foot long sledge and go-kart run!

We grassed over the vegetable plot, and built a chalet store that doubled as a Wendy House.

All plants have an urge to get larger and quite often this growth, if unchecked, causes big problems for the plants themselves and for their neighbours! Photography is often helpful in revealing such details with great clarity!
This 1985 photo of our garden shows a very large Mountain Ash (Sorbus aucuparia) tree in the upper left picture, diseased Blue Spruce conifers in the centre of the picture and two dark green conifers on the right of the picture, which were overgrown. The latter conifers were obstructing the main exit from the lawn, causing nearby grass to struggle and also causing some of the Yorkstone paving to break up.

This photo spurred us into action and 24 hours after seeing the photo in 1985 the two dark conifers on the right of the picture were gone!
The two tall unhealthy looking Blue Spruce in the centre of the 1985 photo had no prospect of regaining good health and were removed later in 1992 during our re-landscaping.
These events helped to convince us that in future it would be best, if at all possible, not to let ordinary garden trees and conifers get overgrown, over crowded or unhealthy!
In February 1990 our neighbour's huge, overgrown Mountain Ash tree, in the upper left of the 1985 photo, was blown down and crashed across our garden, demolishing our only good apple tree of the 16 fruit trees we had in the orchard. This was a major event which forced up the pace of our re-landscaping plans!

Within seven years the Mountain Ash and the unhealthy conifers in the centre of the picture were also gone!

We did make a mistake with our choice of hedge - those 65 Leylandii looked quite cute in the back of the estate car.  However, 8 years later they were towering over us.

In addition our needs for the garden were changing as our children were heading towards there teens and this also influenced our re-landscaping. The question was - was it possible to achieve this with our new plants?........ we would have to wait and see!

Large rocks have been added, straight lines made into curves

Reasons for re-landscaping 1992-1995 We are interested in reviewing why we re-landscaped in such a major way In the 1990s. Some of the reasons are evident in this 1985 photo! 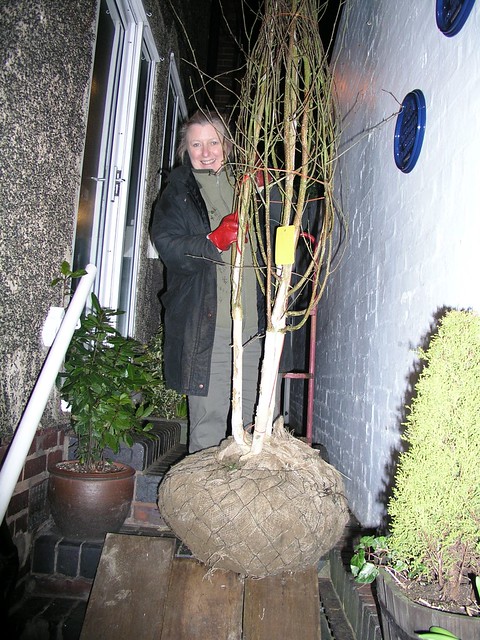 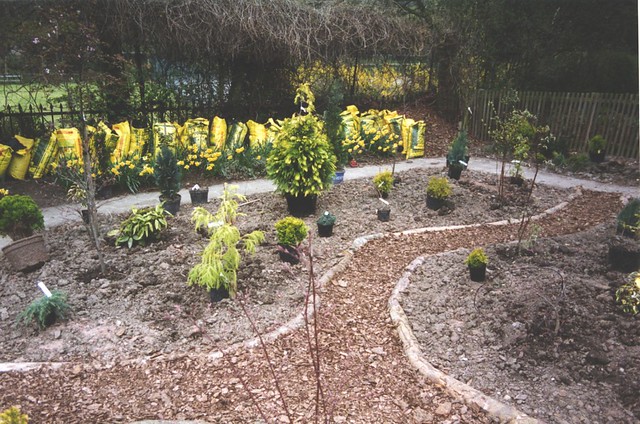 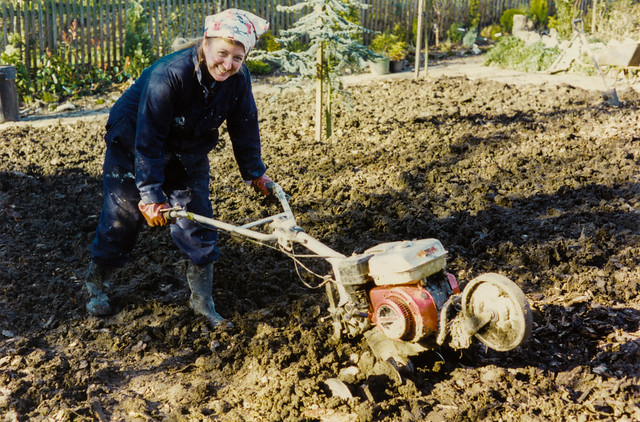 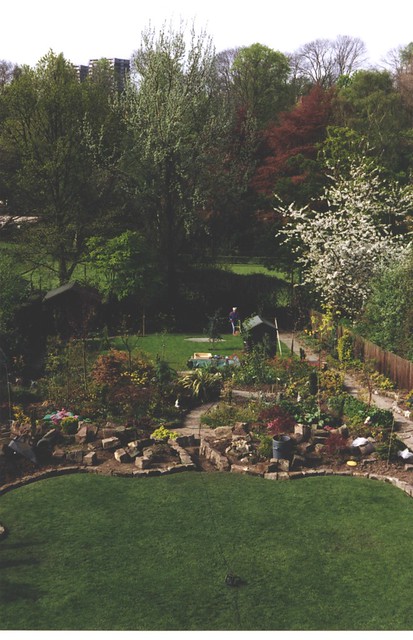 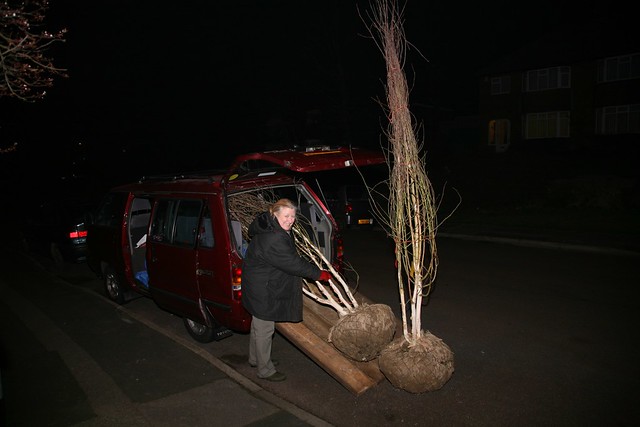 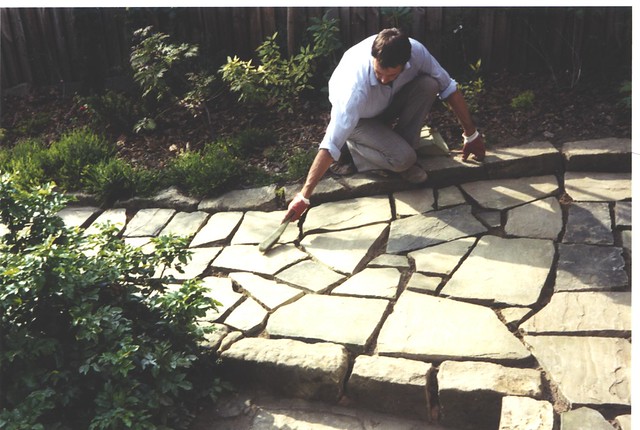 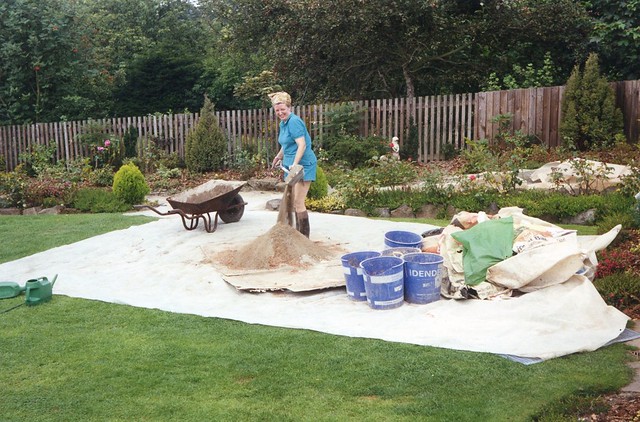 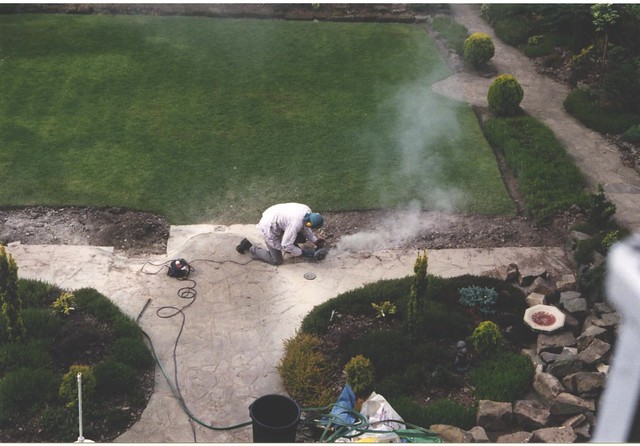 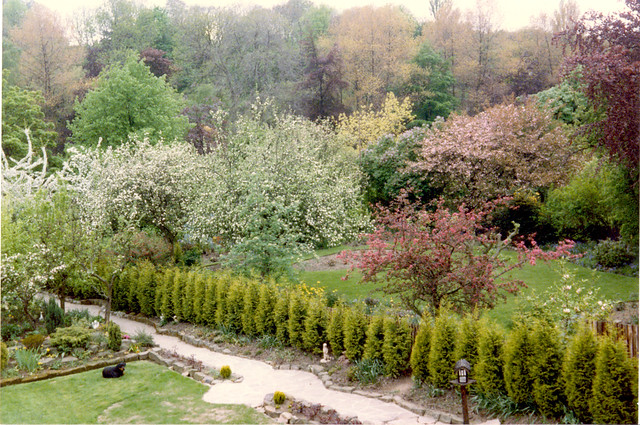 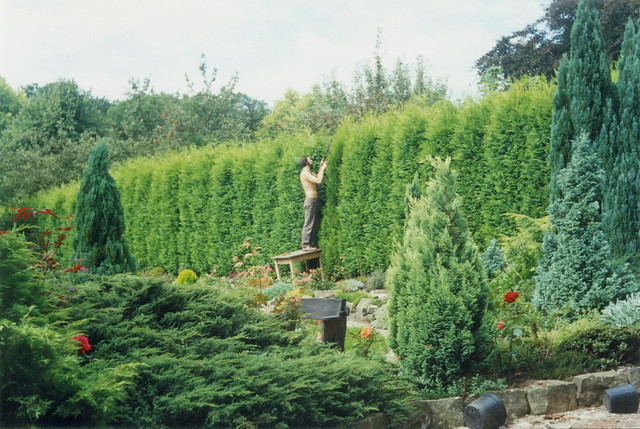 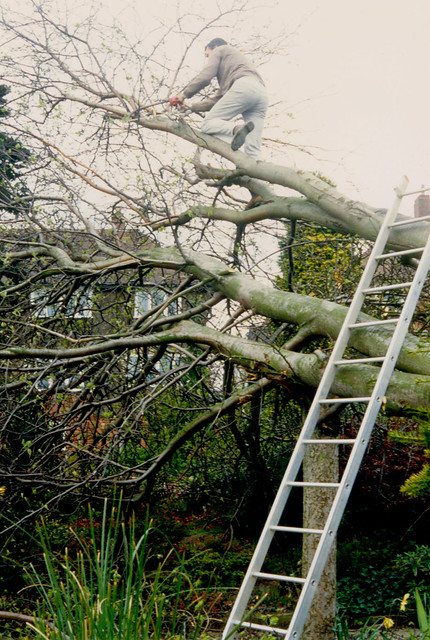 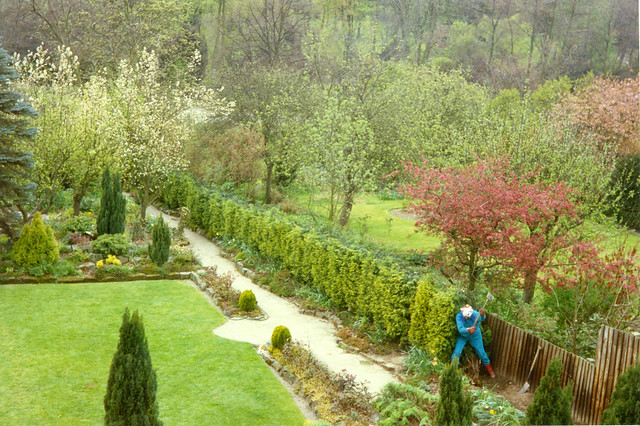 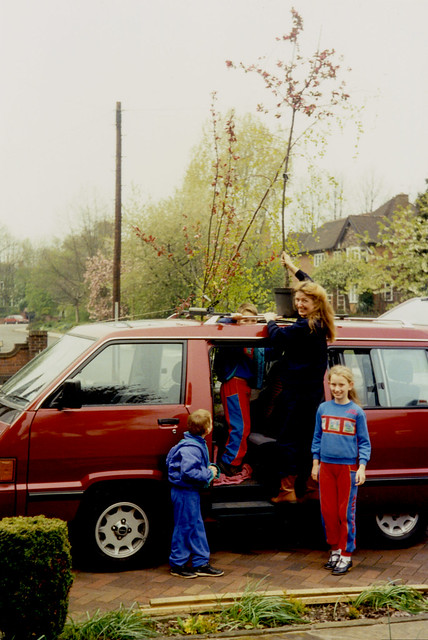